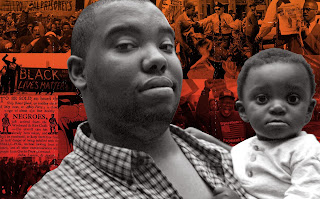 Reading Ta-Nehisi Coates is not easy.  The difficulty is  constituted neither by his prose style nor his subject matter, because the subject matter is familiar and his sentences are music for the inner ear. Difficulty slams into you from a place he is not exploring, from the badlands where signs defy decoding. You feel that his having borrowed the title Between the World and Me from one of the stellar poems of 20th century American poetry transports you to a desert where the bones of David Walker, Herman Melville,  Walt Whitman, Alexander Crummell, Mark Twain, and Ralph Ellison are strewn helter-skelter and the air smells like Theodore Bilbo's breath.  In that arid, alienating place, you are hearing footsteps from In the American Grain by Williams Carlos Williams and Brothers and Keepers by John Edgar Wideman, although ultra-orthodox literary  criticism wants you to hear a sermon from James Baldwin that simply is not available. The difficulty is constituted by the idiosyncrasy  of how your mind reads, by your affinity with Richard Wright.

Idiosyncrasy begets temptations.  Under the influence of Coates's tip of the hat to Richard Wright and the space/time where an enormous number of males have no sanctuary, you are tempted to listen once more to Billie Holiday sing "Strange Fruit."  But wouldn't the mood produced actually prejudice your reading of how Coates depicts the hard place and the rock?  Listen to Thelonious Monk, October and November 1947, Blue Note LP 5002.  Monk and Art Blakey sound you to read.  You are tempted to ask why Coates romanticizes life at Howard University beyond the classroom as the Mecca.  His idea of Mecca is a translation of comments on a pilgrimage by a man whom Ossie Davis eulogized as one who made the cowardly "thoroughly ashamed of the urbane and smiling hypocrisy we practice merely to exist in a world whose values we both envy  and despise."  Is it urbane or cosmopolitan to tell your son about that Mecca and tell him nary a word about Chicago's  Mecca, the 1891 apartment building, and what Gwendolyn Brooks said about that Mecca?  She ordered us to "Sit where the light corrupts your face."  When you drop knowledge for your son, employ economy.  Aretha Franklin's beautiful phrasing of "And temptation's strong" cuts across Monk's "Humph."  Trying to accord Mr. Coates the sympathy and respect he accorded Wright's illuminating habitation of the black male body, you are tempted to say unto him invest more in the vengeance of the Old Testament God for whom the pen is the sword.  After Ferguson and the white magic of daily systemic murder in the United States, you are tempted to suggest that the human body in our nation professes the New Testament God to be an invisible shadow and act.  After all, who told Jesus he could change his name?  Who?  Ah, Mr. Coates you use the word "body" too much in Between the World and Me and are too stingy in using the word "mind."  Temptations strengthen idiosyncrasy.

You find it tantalizingly informative that Ta-Nehisi Coates chose not to imprison his letter to his son in the ancient form that letters can still assume.  He begins "Son," (page 5) and ends "Through the windshield I saw the rain coming down in sheets." (page 152)  He did not begin "Dear Son," and end "Your father, Ta-Nehisi".  The lack of formality says something about the 21st century, about the distance between what Mr. Coates deems to be the proper shape of correspondence and the outmoded antiquity  of your ideas about how courtesy ought to be signaled.  So be it.  Although generic form is an action, it is superseded by substance.  Substance is what you are looking for in Coates's book.


You find it in the possibility that Coates is saying something to his son from the region of mind that only he can access, that is curiously represented when he writes of becoming a writer without a degree from Howard University:


I felt that it was time to go, to declare myself a graduate of The Mecca, if not the university.  I was publishing music reviews, articles, and essays in the local alternative newspaper, and this meant contact with more human beings.  I had editors ---more teachers --- and these were the first white people I'd ever really known on any personal level.  They defied my presumptions --- they were afraid nether for me nor of me.  Instead they saw in my unruly curiosity and softness something that was to be treasured and harnessed (62).


The slave trade treasured black bodies and harnessed them on plantations in a new world of capitalism.


You write on the margins of page 62: "Reconstructing the tragic chain of circumstances...." and "In the hope that there is something to learn from this account, something to salvage from the grief and waste, I've striven for accuracy and honesty."  You quote from John Edgar Wideman, Brothers and Keepers (New York: Vintage, 1984), page xi, hoping (with genuine desperation) that Wideman's honesty will anoint your reading of Between the World and Me.  You begin to fear that Coates is 100% American. You write words published in 1925 on a separate sheet of paper: "Here Poe emerges --in no sense the bizarre, isolate writer, the curious literary figure.  On the contrary, in him American  literature is anchored, in him alone, on solid ground." This assertion comes from William Carlos Williams, In the American Grain (New York: New Directions, 1956), page 226. You are annotating Coates's book because something is emerging.  Poe became a "major" American author by not graduating from the University of Virginia.  William Carlos Williams, a doctor and poet, found something American to admire in Poe. So too did Richard Wright, who said that had Poe not lived we would have invented him.  In the back of your mind, memory whispers: one of Wideman's early novels is entitled The Lynchers.


Is Coates saying something to his son about narrative that exceeds the conventional talk (recently rebaptized by necessity as THE TALK) which non-white American fathers think they are obligated to have with their non-white sons, saying something about the talk that ,apparently,  white fathers never have with their white sons?  When it comes to how the talk and lives of all color matter, the tongue of the white male American body is as bound as the feet of a Chinese emperor's favorite wife.  Perhaps Coates is quite indirectly telling his son that the so-called white mind actually is a fiction without material references.


"You have not yet grappled," Ta-nehisi Coates writes to his son, "with your own myths and narratives and discovered the plunder everywhere around us "(21).  When and if the son does discover American history is an interlocked series of subjective narratives , then he will have to weigh the commerce of narrative and  violence  in maintaining  America's social and racial contracts.  Men created America by violating the minds and bodies of men, women, and children. You think it would be good for Coates to give his son copies of Hayden White's The Content of the Form: Narrative Discourse and Historical Representation (Baltimore: The Johns Hopkins University Press, 1987), Grace Elizabeth Hale's Making Whiteness: The Culture of Segregation in the South, 1890-1940 (New York: Pantheon, 1998), Tzvetan Todorov's The Conquest of America (New York: Harper & Row, 1984), John Hope Franklin's From Slavery to Freedom: A History of Negro Americans, 3rd ed. (New York: Alfred A. Knopf, 1967) and Leslie Bow's Partly Colored: Asian Americans and Racial Anomaly in the Segregated South (New York: New York University Press, 2010). The son might plunder these books at his leisure. Or he might reject them and  choose to plunder a very different selection of texts.  You guess that Ta-nehisi Coates would have his son plunder in the name of unqualified  love of himself.   Should he do so,  he might indeed produce his own myths and narratives and thereby rival those created by his father.


He might empower himself to destroy the  ways the agents of mass media, social networking,  the ubiquitous Internet, and the American police state work feverishly to constipate his mind as well as his body and his spiritual essence.

Between the World and Me is a strong, complex, provocative book.  Like all American authors, Coates could not avoid signing deals with demons in order to have his book published commercially. You know that. You  have compassion for the book's instances of class-blindness. You  make peace with its flaws, the moments when specificity becomes generalization, because the book subverts gross ignorance and exposes your nation's unique brand of denial.  It is a brave book.  It is a book that James Meredith, author of  A Mission from God: A Memoir and Challenge for America (New York: Atria Books, 2012), might endorse if he is caught at just the right moment of generosity.  It is a truth-telling book which inspires dread.  It does not inspire promises of false hope that shall never be delivered.


Dread is the real deal in the United States of America and elsewhere. The Dream is an evil fiction that attempts to enslave people, and  too often it succeeds beyond the expectations of its authors.


Ta-nehisi Coates has produced a first-rate secular jeremiad, an honest meditation on Dread.  There is a thin but critical line between a sermon and a jeremiad.  Coates is neither a priest nor a preacher.


You sit in the desert, secure in your idiosyncrasy.  You and the ghost of Claude McKay sit in the sand and take bets on who shall be the first to see Time's unerring terrorism, with much help from Nature,  dispatch the millions of people who worship in the temples  and cathedrals and mosques  of white supremacy.